For the past 20 years, Julio has taken medication daily to treat his diabetes, but it was still a shock when he suffered a hemorrhage in his right eye more than a year ago.

“I could see blood,” said the 46-year-old from Kendall, who did not want his full name used. “It started with minor bleeding and I couldn’t see from my right eye.”

He was diagnosed with diabetic retinopathy, a common complication of diabetes, according to the Centers for Disease Control and Prevention. The condition is characterized by progressive damage to the blood vessels of the retina, the light-sensitive tissue at the back of the eye that is necessary for good vision. Often, the vessels swell and leak fluid or even close off completely.

If left untreated, diabetic retinopathy can cause significant vision loss. Symptoms include blurred vision, distortion and a change in vision. It is not curable but treatable.

Diabetic retinopathy is the leading cause of blindness among U.S. adults ages 20-74, according to the CDC. Early diagnosis and timely treatment are critical, as 50 percent of patients are diagnosed too late for treatment to be effective, the CDC said.

For those who receive timely treatment, intravitreal injection has changed the course of the disease, said Dr. Andrew Schimel, retina specialist at the Center for Excellence in Eye Care at Baptist Health South Florida. Medicine is injected inside the eye, near the retina, which counteracts the damage to the blood vessels.

Intravitreal injection has become the most common ophthalmic procedure performed in the United States, according to the American Academy of Ophthalmology.

Pars plana vitrectomy is a mechanical approach to eye surgery, removing blood and scar tissue from the eye, Flynn said. This procedure is only used for advanced and complex cases of diabetic retinopathy, such as when patients have lost the ability to drive or navigate independently.

Not every patient with diabetic retinopathy requires treatment, said Dr. Mark Herriott, a board certified optometrist with Eyecare Associates of Lees Summit. Patients with mild cases of the disease can receive counseling on how to monitor and control their glucose levels. Moderate to severe cases are referred to retina specialists.

In Julio’s case, he underwent outpatient surgery to reattach his retina and then received an intravitreal injection to optimize his vision. He has regained complete vision in his right eye but has light cataracts in both eyes.

Cataracts cloud the natural lens in the eye; symptoms include blurred vision, increased difficulty seeing at night and sensitivity to the glare from lights. Most cataracts develop in people 55 and older, but they occasionally occur in infants and young children, according to the American Optometric Association. Diabetic patients have irregularities in their blood, including increased sugar and cortisone levels, which lead to the early onset of cataracts.

As for Julio, he is happy to have regained his full vision.

“I feel good,” Julio said. “Before surgery, I couldn’t see in my right eye.”

Dr. Herriott notes that November is National Diabetes Awareness Month. He reminds all diabetics that they should be seeing their eye doctor at least once a year to make sure no treatable diabetic eye damage is occurring. 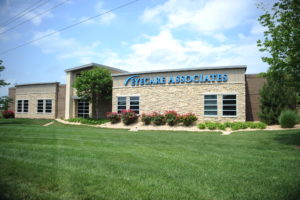 After being referred to Eyecare Associates of Lee’s Summit by a coworker several years ago, I have always had excellent eye care exams and service. They accept my vision insurance and always explain everything thoroughly. I’m glad to have found them. I have seen three of the doctors over the years — one upon a last-minute emergency visit where the doctor even stayed late on a Saturday just to see me, since it was an allergic reaction/emergency. I recommend them highly!